Taken 3 (also stylized as Tak3n) is a 2015 American action thriller film directed by Olivier Megaton and written by Luc Besson and Robert Mark Kamen. It is the sequel to the 2012 film Taken 2 and the third and final film in the Taken film trilogy. The film stars Liam Neeson, Forest Whitaker, Maggie Grace and Famke Janssen. The film was released on January 9, 2015.

A few days before Kim Mills's birthday, Bryan Mills unexpectedly arrives shortly after Kim verifies that she is pregnant. After a brief conversation, Bryan leaves for his apartment, where he is met by his ex-wife, Lenore "Lenny" Mills. Lenny reveals that she and her current husband Stuart St. John are having relationship issues, and that she has begun to rekindle her romantic feelings for Bryan, however Bryan refuses to allow himself the pleasure of Lenny's company until such a time as she and Stuart work out their problems. Aware of the relationship between Lenny and Bryan, Stuart comes by Bryan's apartment to ask him politely but firmly to stay away from Lenny.

The following day, Lenny texts Bryan asking if she can come by to see him and if so to pick up bagels for the time together. Bryan obliges her request, but upon returning to his apartment discovers that Lenny has been murdered. Before he can react to this development, patrolmen of the Los Angeles Police Department arrive on the scene and move to arrest Bryan on suspicion of murder. Needing time to gather actionable information to avenge his wife, Bryan disarms and knocks out the officers, but before he can leave additional policemen arrive in the area, precipitating a chase through the neighborhood. Eventually, Bryan is able to elude the police by making use of an underground storm drain located in a residential garage to covertly move away from the scene. After calling Kim and informing her of Lenny's murder, Bryan sets out to investigate the homicide. Meanwhile, LAPD Inspector Franck Dotzler is assigned to Bryan's case, and begins the manhunt to locate and arrest Bryan.

Bryan begins his investigation by recovering weapons and electronics from a secure location, then retraces Lenny's footsteps, which leads him to a convenience store where he recovers surveillance footage of Lenny being grabbed by unidentified men. Before Bryan can act, LAPD detectives arrive and rearrest Bryan for murder, however when they report this information to Dotzler the inspector warns the detectives that they are being played, correctly guessing that Bryan wanted to be captured based on his discovery of Bryan's military service record. Dotzler's concerns prove justified when Bryan picks the locks on his handcuffs and commandeers the police car he is in, resulting in a vehicle chase that ends when Bryan intentionally wrecks his car in an elevator shaft to elude the LAPD. Having accessed the LAPD's systems from the patrol car's laptop during the vehicle chase, Bryan begins analysis of the information.

Meanwhile, Kim has grown increasingly irritated with both Stuart and Dotzler. After attending Lenny's funeral, she is approached by Sam, a CIA colleague of Bryan who covertly alerts her to the presence of a bug from which Bryan is watching her. After being advised to stick to her daily routine, Kim purchases a yogurt drink and consumes it in the store before setting off for her college campus for class. After inexplicably becoming nauseated during class, Kim dismisses herself to use the restroom, where she meets with Bryan. Bryan explains that he spiked her yogurt to make her nausea so she would have to use the restroom, then offers Kim the antidote. After removing a bug placed on Kim by the LAPD, Bryan and Kim exchange information. Bryan learns of Stuart's body guards, and after eluding the LAPD officers on campus follows the men down a scenic country route only to be ambushed by a black SUV, which pushes his car off the road. Commandeering a vehicle by force, Bryan follows the men to a liquor store where he confronts the quartet, but is unable to learn anything of use. Deducing that the men work for Stuart, Bryan abducts and harshly interrogates Stuart, who reveals that his debt to an ex-KGB Spetsnaz and Afghan War veteran operative named Oleg Malankov was the probable reason for Lenny's murder.

With assistance from his CIA colleagues and a reluctant Stuart, Bryan gains entry to Malankov's heavily guarded suite. After killing the guards, a vicious gunfight, and a brutal brawl, a mortally wounded Malankov reveals that Stuart tricked them both: Stuart arranged for Lenny's murder as part of a plan to collect the 12 millions dollars he collected in life insurance from Lenny's death. Malankov adds that when he failed to kill Bryan, Stuart used Bryan to kill Malankov and eliminate all threats. In a delivery truck in the garage below the suite, Stuart shoots Sam and abducts Kim, intending to flee the country at the nearest airport. Bryan, injured from his earlier encounter in Malankov's suite, gives chase in a Porsche. After locating his daughter from the tracker in her phone Bryan arrives at the airport just as Stuart's plane begins preparations for take off. After destroying the plane's landing gear with the car to prevent it from taking off, Bryan confronts Stuart and engages in a brief but violent struggle with him. Ultimately, Bryan emerges victorious and prepares to kill Stuart, but pauses at Kim's pleas. Bryan decides to spare Stuart's life, warning him to expect him again if he escapes justice or completes a reduced prison sentence. Dotzler and his LAPD officers arrive shortly afterward and arrest Stuart.

In the aftermath of Stuart's arrest, Bryan, Kim, and Kim's boyfriend discuss Kim's pregnancy. After assuring Kim that whatever she decides he will support her decision, Kim informs Bryan that if the baby is a girl she would like to name it Lenore after her mother.

On September 28, 2012 it was revealed that lead actor Liam Neeson has said that there would not be a third film, according to his thoughts the chances of Taken 3 were minimal. However, the third film did indeed go into production. Robert Mark Kamen and Luc Besson wrote the script for Taken 3, as they did the other films. Besson is also producing, through his company EuropaCorp. No plot details have been revealed at this point, although Kamen has hinted that Taken 3 won’t follow the same formula. “We’ve taken everyone we can take — it’s going to go in another direction,” he said in 2012.

On June 24, 2013, it was revealed that Neeson is in final talks to reprise his role as Bryan Mills, but he'll take $20 million for this role. On January 29, 2014, Forest Whitaker has joined the film. On February 1, 2014, it was revealed that Neeson said that he is in the film as long as no one gets taken. On March 12, 2013, Maggie Grace has confirmed for her role in the film, followed by closing a deal with Famke Janssen on the next day. On March 24, 2014, Leland Orser is also set to play his role in the cast of the third film which also includes Jon Gries already. On March 31, 2014, Jonny Weston has also signed on to star in the film, he'll play as Kim's boyfriend.

The principal photography of the film has begun on March 29, 2014 in Los Angeles, California. The filming also took place in Atlanta, Georgia.

Taken 3 has received mostly negative reviews from critics, unlike the previous two films. Taken received positive reviews and Taken 2 received largely mixed to negative reviews. On Rotten Tomatoes the film holds a mere rating of 10%, based on 92 reviews, with an average rating of 3.4/10. The site's critical consensus reads, "Hampered by toothless PG-13 action sequences, incoherent direction, and a hackneyed plot, Taken 3 serves as a clear signal that it's well past time to retire this franchise." On Metacritic the film has a score of 25 out of 100, based on 29 critics, indicating "generally unfavorable reviews". Common complaints from fans were the villains being changed to Russians (rather than Albanians as the previous two films featured) and the character of Stuart being recast and then made into the antagonist. Some argued that the second film set up a sequel by claiming that Murad's other sons would seek revenge if he is killed. Although it should be noted that while the trademark Albanians did not make a return, the Russians were in fact mentioned by Bryan in the first film. Other criticisms focused on the rapid editing during the action scenes and Kim's pregnancy subplot.

In CinemaScore polls conducted during the opening weekend, cinema audiences gave Taken 3 an average grade of "B+" on an A+ to F scale. 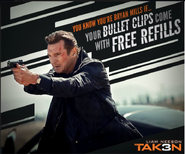 One of several memes promoting the last film 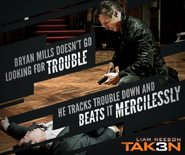 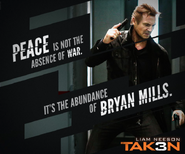 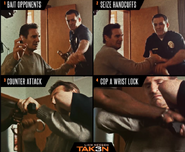 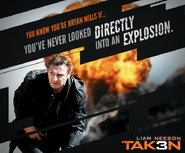 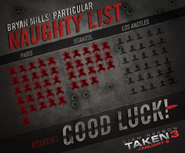 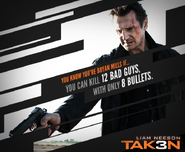 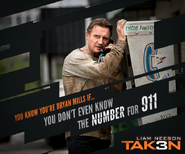 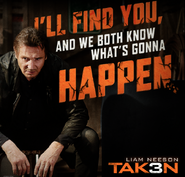 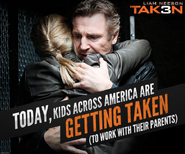 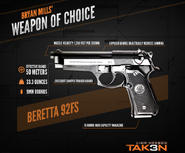 Add a photo to this gallery

Retrieved from "https://taken.fandom.com/wiki/Taken_3?oldid=6164"
Community content is available under CC-BY-SA unless otherwise noted.